If you hear a "prominent" economist using the word "equilibrium," or "normal distribution," do not argue with him; just ignore him, or try to put a rat down his shirt. 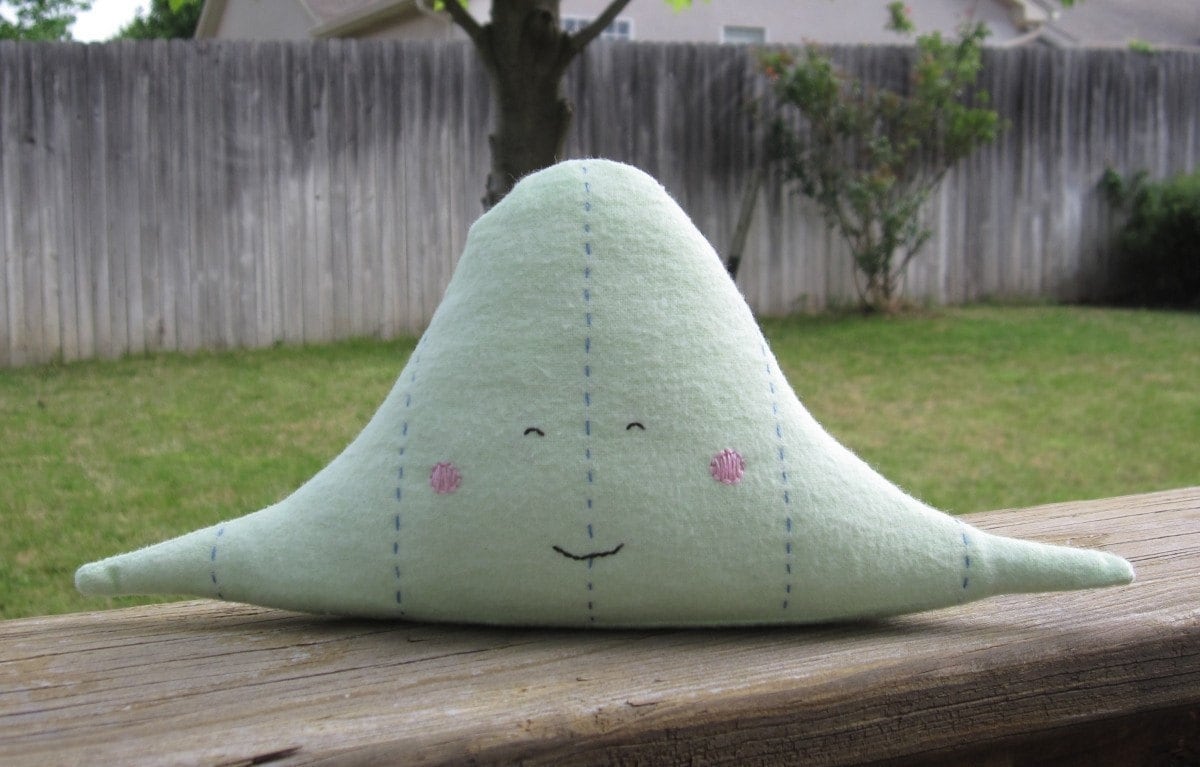 From your introductory coursework in statistics and econometrics you're probably familiar with the one-dimensional normal distribution. This lesson will build on the intuition you already have in the one-dimensional case to help you gain a deeper understanding of the multivariate normal distribution. There's a good chance that you've seen some of this material before. But from past experience, many students are a bit fuzzy on the details.

We'll start by reviewing the key commands for working with normal distributions in R: d/p/q/rnorm(). These will come up again and again in future lessons. Then we'll take up the challenge of simulating correlated normal draws. Along the way we'll learn how to calculate column means, variance-covariance matrices, and correlation matrices with the commands colMeans(), cov(), cor() and cov2cor(). We'll also learn to make kernel density plots using the ggplot commands geom_density() and geom_density2d_filled(). Our destination in this lecture is the Cholesky Decomposition, an important result from matrix algebra that's extremely helpful for understanding multivariate normal distributions. We'll work up to this result in easy steps, introducing some basic R commands for matrix algebra as we go, including %*%, t(), and chol(). At the very end, once you know how to generate correlated normals from scratch, I'll relent and allow you to use the extremely helpful command rmvnorm() from the mvtnorm package instead. An epilogue to this lesson makes the case for why doing things "the hard way" before you allow yourself to use a canned function like rmvnorm() is worth the trouble. 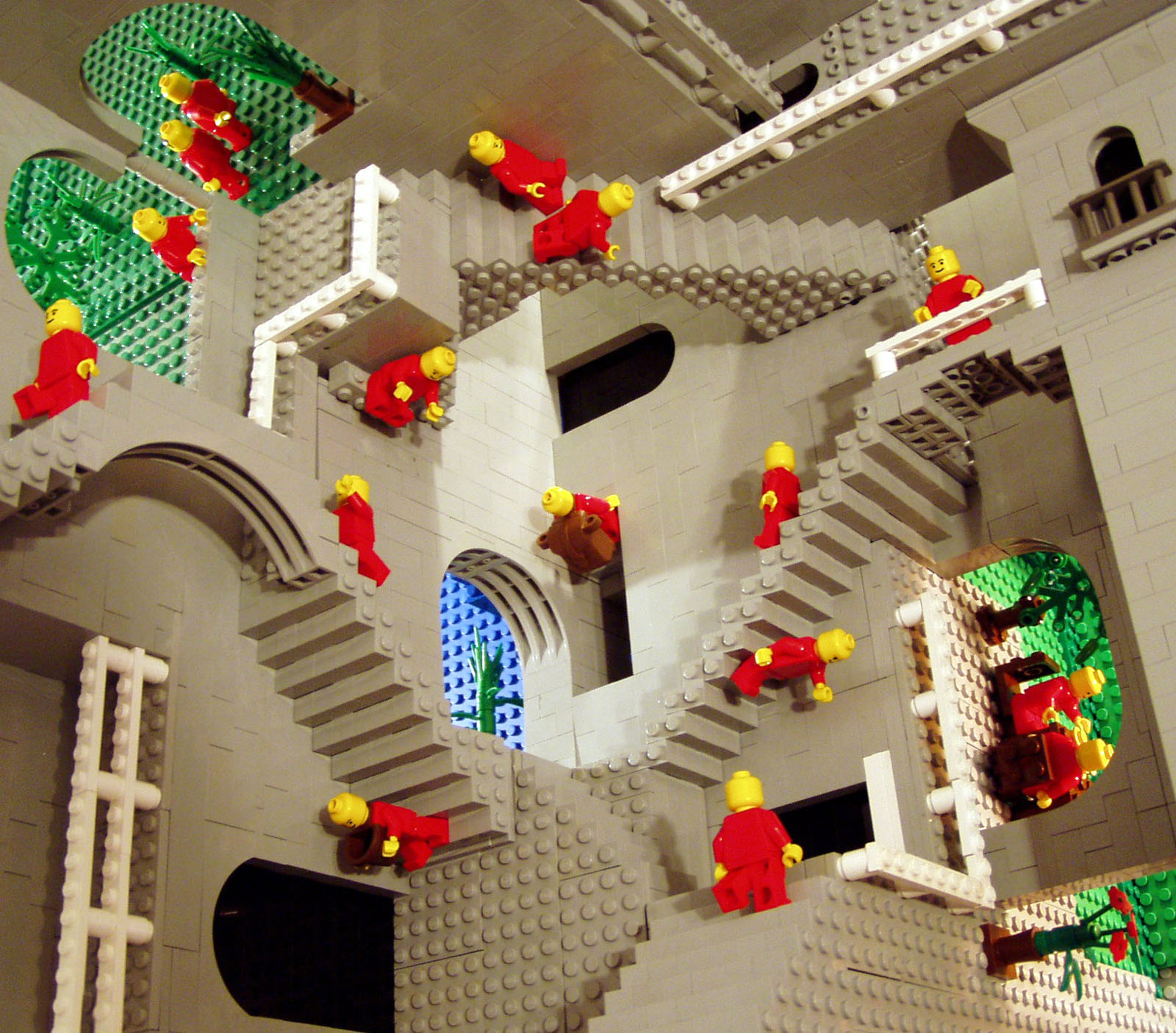 One-dimensional normal distributions can only take us so far. In many important applications we need to work with two or more correlated normal random variables. For example, to run a simulation study exploring the properties of the instrumental variables estimator we need a way of creating correlated "first stage" and "second stage" errors. Fortunately we can use the same basic approach as above to build up a multivariate normal random vector \(\mathbf{X}\). We start with a vector of independent standard normals, scale them with a matrix of constants and shift them with a vector of yet more constants. In other words: \(\mathbf{X} = \boldsymbol{\mu} + \mathbf{A}\mathbf{Z}\). If this looks forbidding, don't worry; we'll build up the intuition step-by-step in this lesson. For the moment, simply take my word for it: the multivariate normal distribution becomes much less formidable once you break it down into its constituent independent standard normals.

We'll start a quick review of the one-dimensional case. After introducing the key R functions for normal distributions, I'll turn you loose on some simple exercises.

The R function for the probability density function of a standard normal is dnorm(). The function dnorm() is the derivative of the function pnorm(). As with pnorm(), R allows us to supply a mean and standard deviation sd to obtain the density of a \(\text{N}(\mu, \sigma^2)\) random variable, but this is only for convenience since \[ \frac{d}{dx} \mathbb{P}(X\leq x) = \frac{d}{dx} \text{pnorm} \left(\frac{x - \mu}{\sigma}\right) = \frac{1}{\sigma}\texttt{dnorm}\left(\frac{x - \mu}{\sigma}\right). \] Accordingly, both of these give the same answer, although the first is easier to read:

The R function for the quantile function of a standard normal distribution is qnorm(). This is the inverse of the function pnorm(). jWhereas pnorm(z) returns the probability that \(Z \sim \text{N}(0,1)\) takes on a value no greater than z, pnorm(p) returns the value of z such that \(\mathbb{P}(Z \leq z) = p\). This means that qnorm(pnorm(z)) equals z and pnorm(qnorm(p)) equals p. For example:

To obtain draws from a general normal distribution we can set the optional arguments mean and sd as above. But as above, this is only for convenience. Remember that we defined a \(\text{N}(\mu, \sigma^2)\) as what you get by shifting and scaling a standard normal. This means that shifting and scaling standard normal simulation draws is the same thing as simulating a \(\mathbf{N}(\mu, \sigma^2)\) random variable, for example:

R accepts a vector as first argument to pnorm(), dnorm(), and qnorm(). This is very handy in practice, since it allows us to calculate the normal CDF/density/quantile function at many points in a single command. For example,

All four of the p/q/d/rnorm() functions accept a vector for their mean and sd arguments. This too can be handy in practice. We can use it, for example, to make normal draws with different means

A common R mistake is specifying the variance rather than standard deviation inside of dnorm(), pnorm(), qnorm(), or rnorm(). The best way to avoid making this mistake is by explicitly writing sd = [YOUR SD HERE]. For example, dnorm(2, mean = 1, sd = 3) is much less likely to lead to confusion than dnorm(2, 1, 3) although both produce the same result: 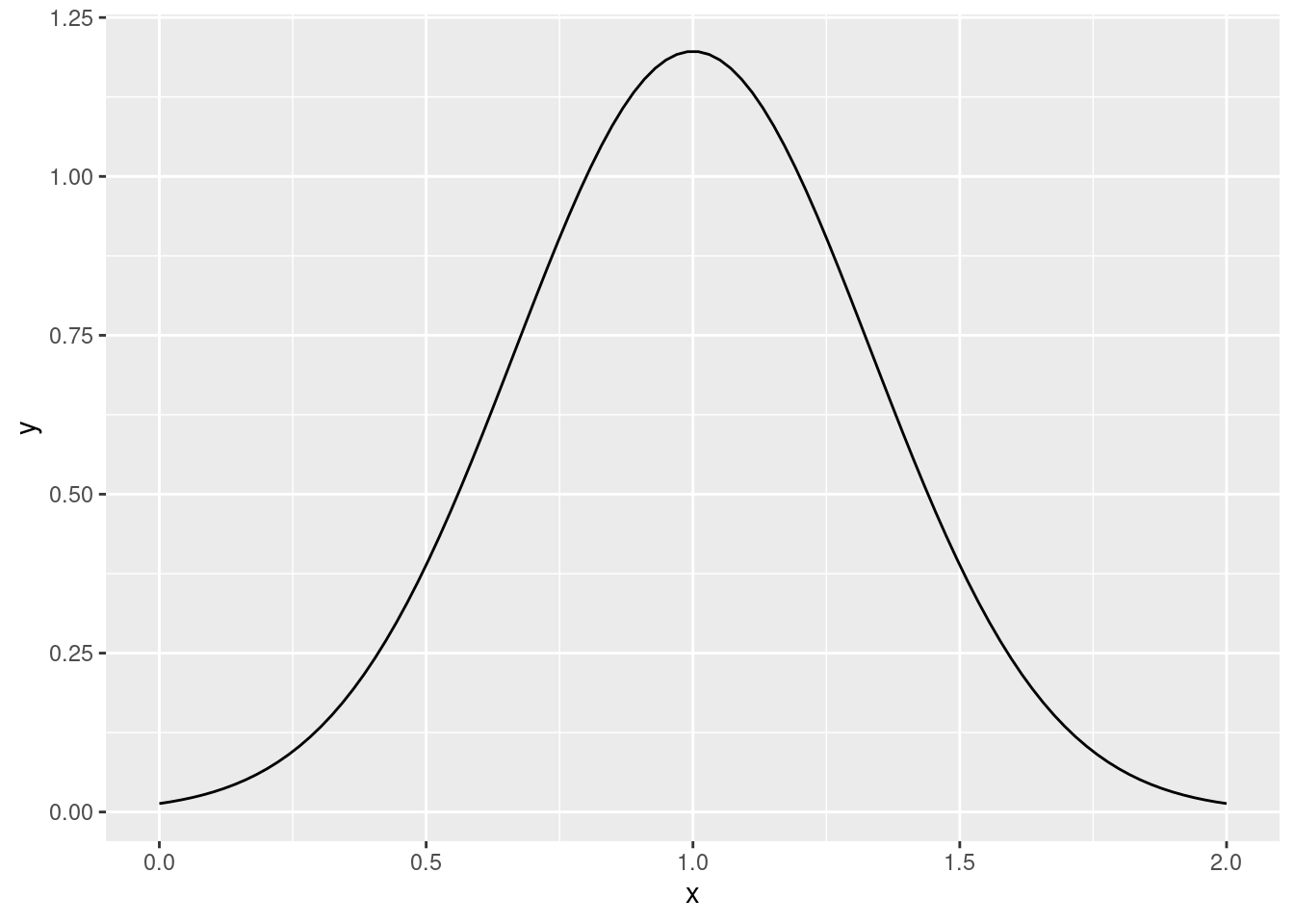 Now we have a matrix with two columns: the first is z1 and the second is z2

To calculate the sample mean of each column, we can use the function colMeans()

To calculate the sample variance of each column of z along with the covariance between them in one fell swoop, we use the cov() function:

When you supply a matrix as your argument, var() and cov() give exactly the same result:

That's because the variance-covariance matrix contains variances and covariances! To obtain the sample correlation matrix, use the function cor():

Now the diagonal elements are one: z1 is perfectly correlated with itself and so is z2. The off-diagonal elements are the correlation between z1 and z2. Again, this matrix is symmetric since cor(z1, z2) equals cor(z2, z1). Given a covariance matrix we can immediately compute the associated correlation matrix by dividing each covariance by the appropriate product of standard deviations:

Alternatively we can use the R function cov2cor() to do this for us:

7.3.3 Add Constants to Shift the Means

Summary statistics are useful, but pictures are far more informative. A helpful way of visualizing the simulation draws in z is by using kernel density estimator. We'll discuss the details of kernel density estimation in a future lesson. For now, you can think of it as a "smoothed histogram." For example, here's a pair of histograms for z1 and z2 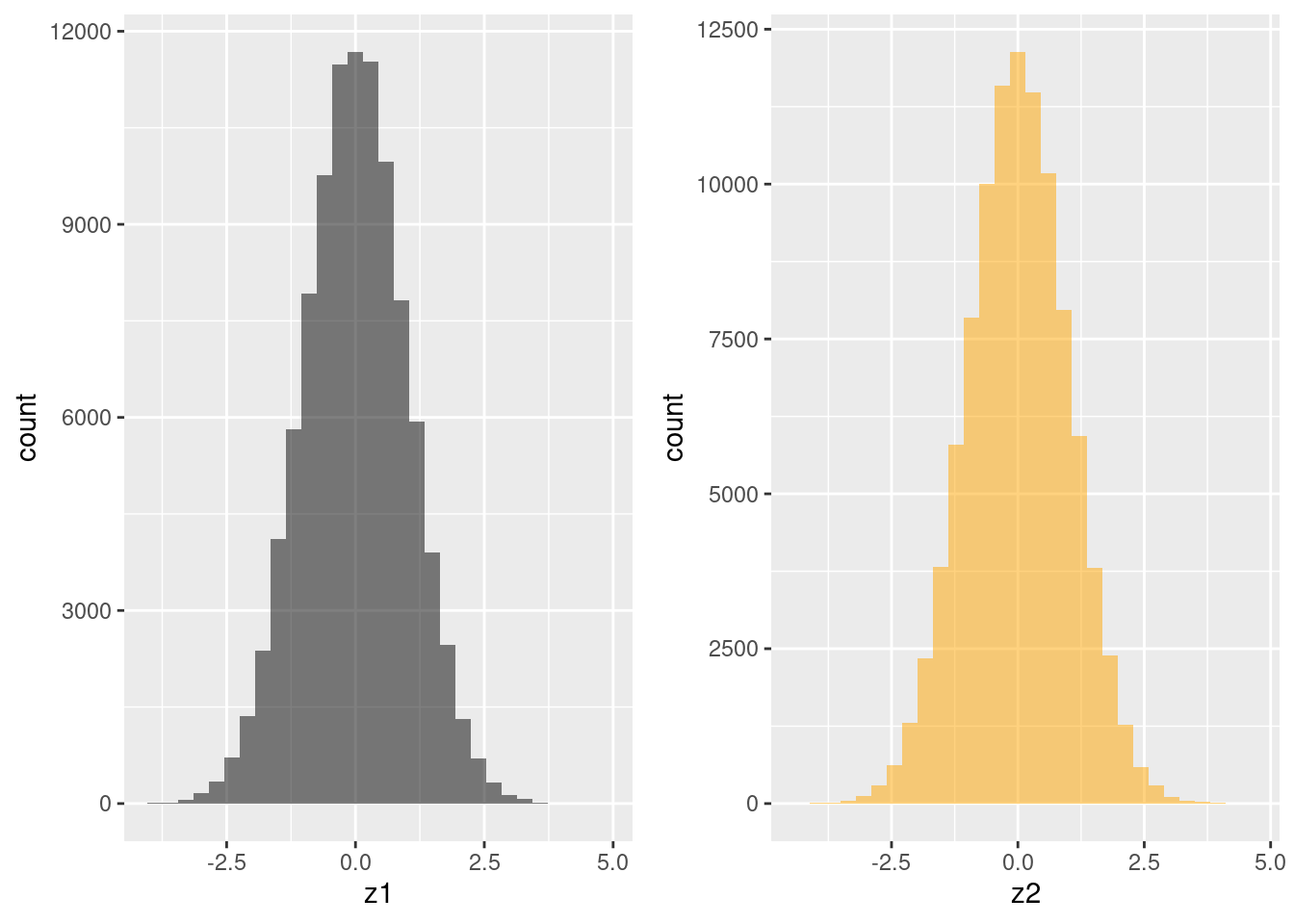 And here's the kernel density version of the same. Notice that the y-axis is no longer a count of observations that fall in a given bin, but a density; the total area under each curve equals one: 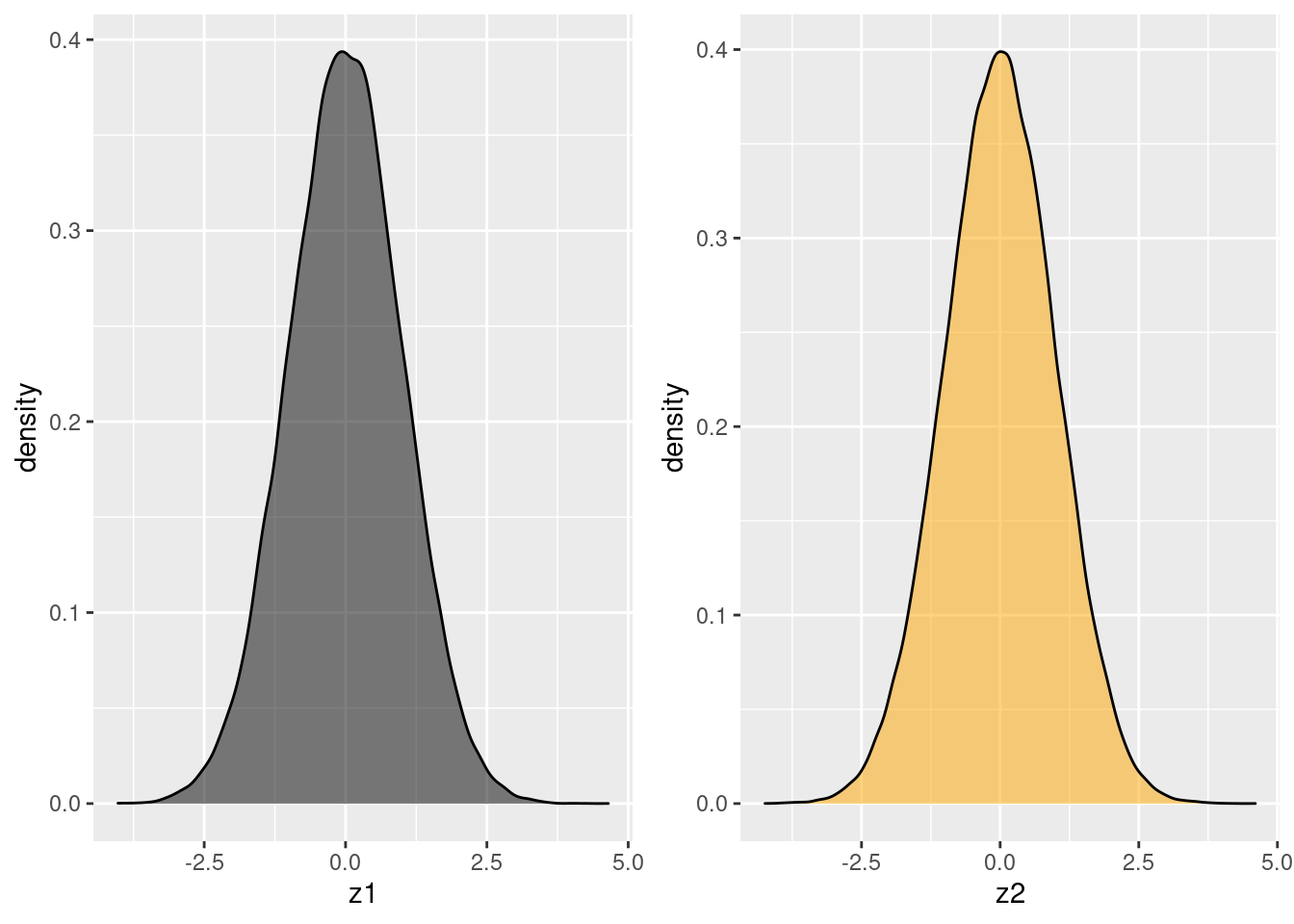 The function geom_density() works in effectively the same way as geom_histogram() but its output is different. The preceding two sets of plots show the marginal distributions of z1 and z2. This tells us how each random variable behaves taken by itself. To see how z1 and z2 co-vary, we need to examine the joint distribution. A two-dimensional kernel density plot is helpful way to do this. Rather than trying to plot a 3d surface, we'll take the "view from above," draw in contour lines, and add a color scale using geom_density2d_filled(): 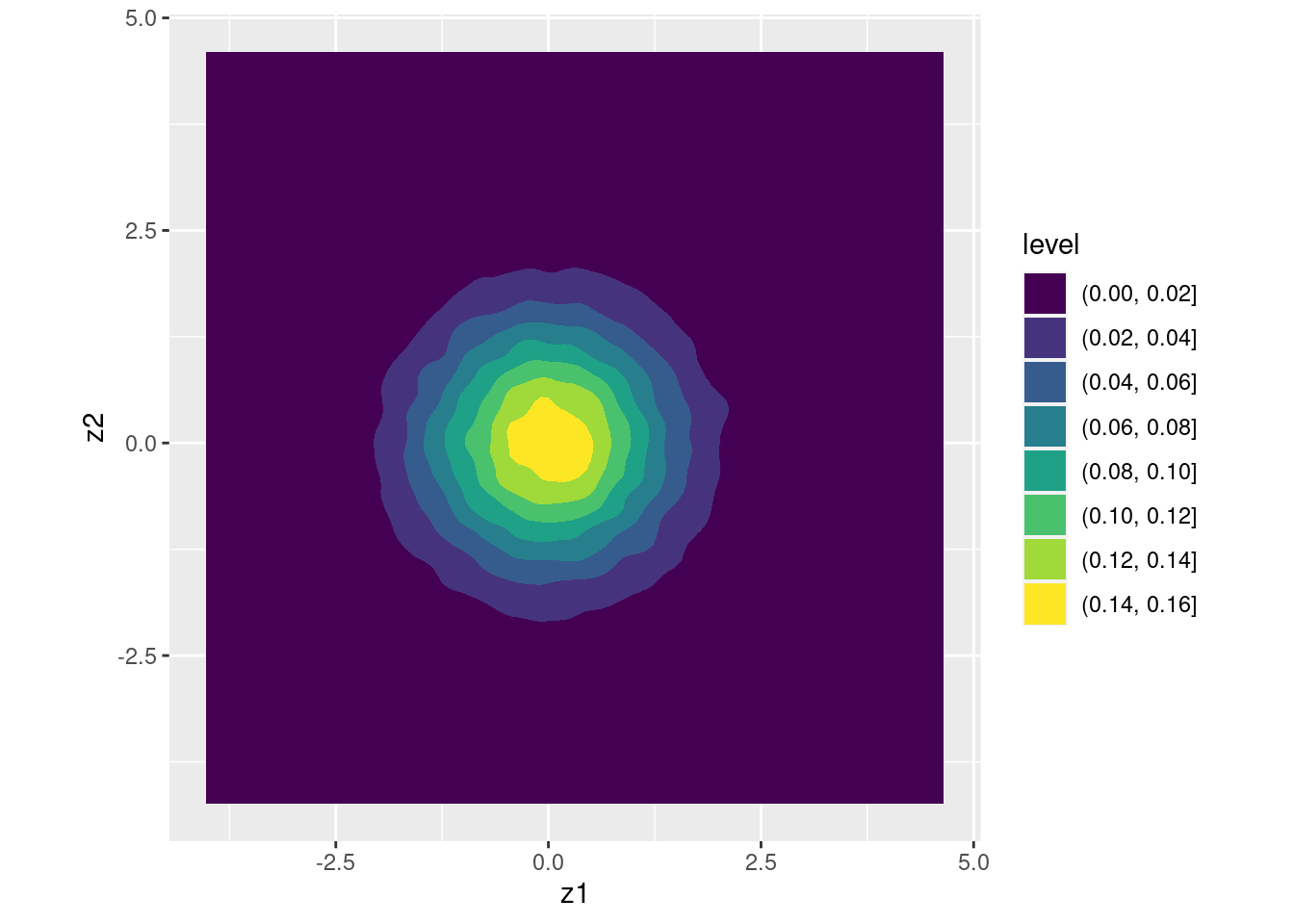 The colors are darker in regions of low density and brighter in regions of high density. Because this plot is constructed from simulated data, it's a bit irregular but we can pick out some obvious features. First, the density is clearly highest around the point \((0,0)\), and falls as we move away from this point in any direction. This makes sense: the mean, median, and mode of both z1 and z2 are all zero. Second, the contours of equal density are circles.

It may not surprise you to notice that we can shift the centers of these circles, by adding constants to z1 and z2. You won't notice the difference in these plots unless you look carefully: only the axes have changed: 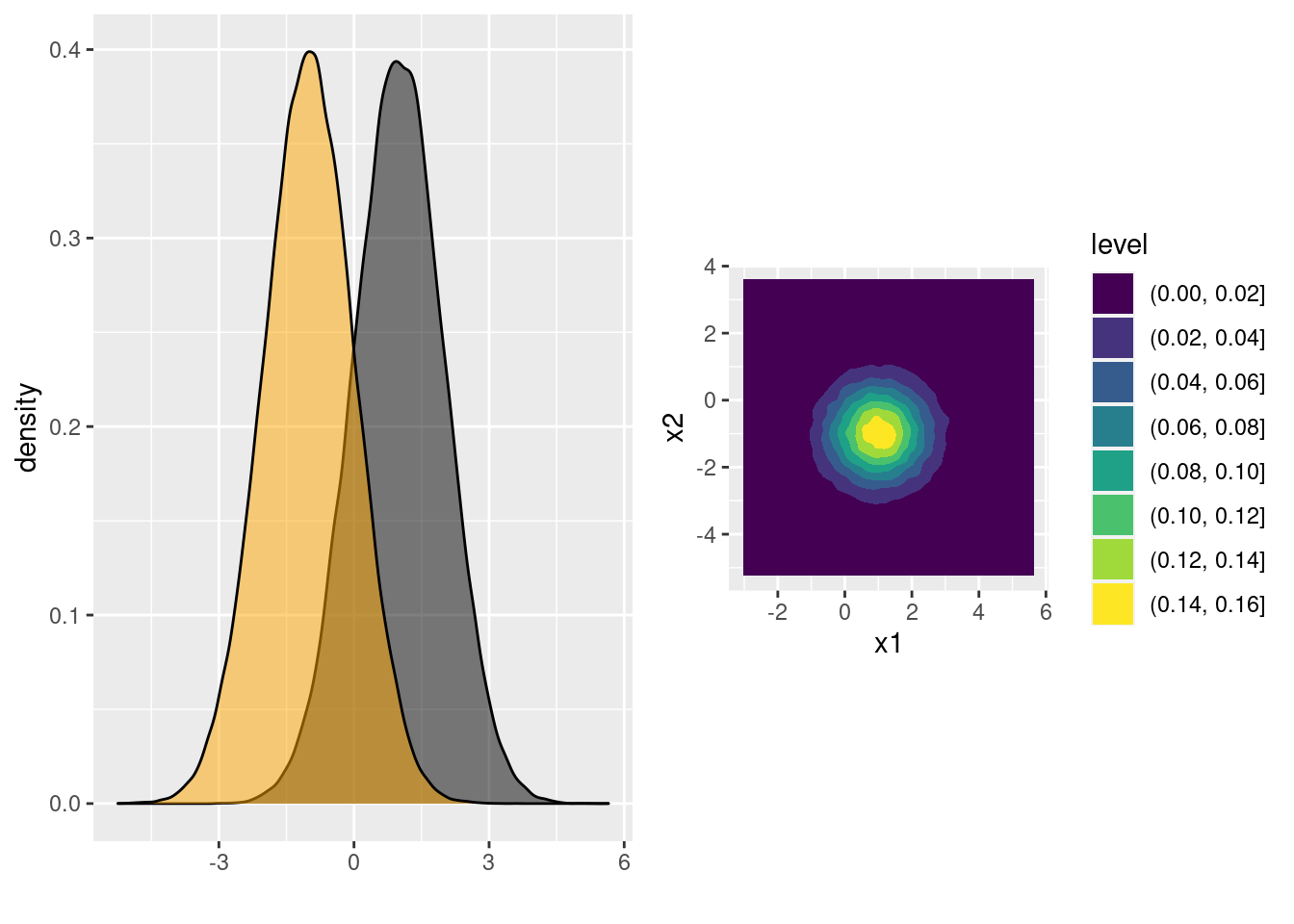 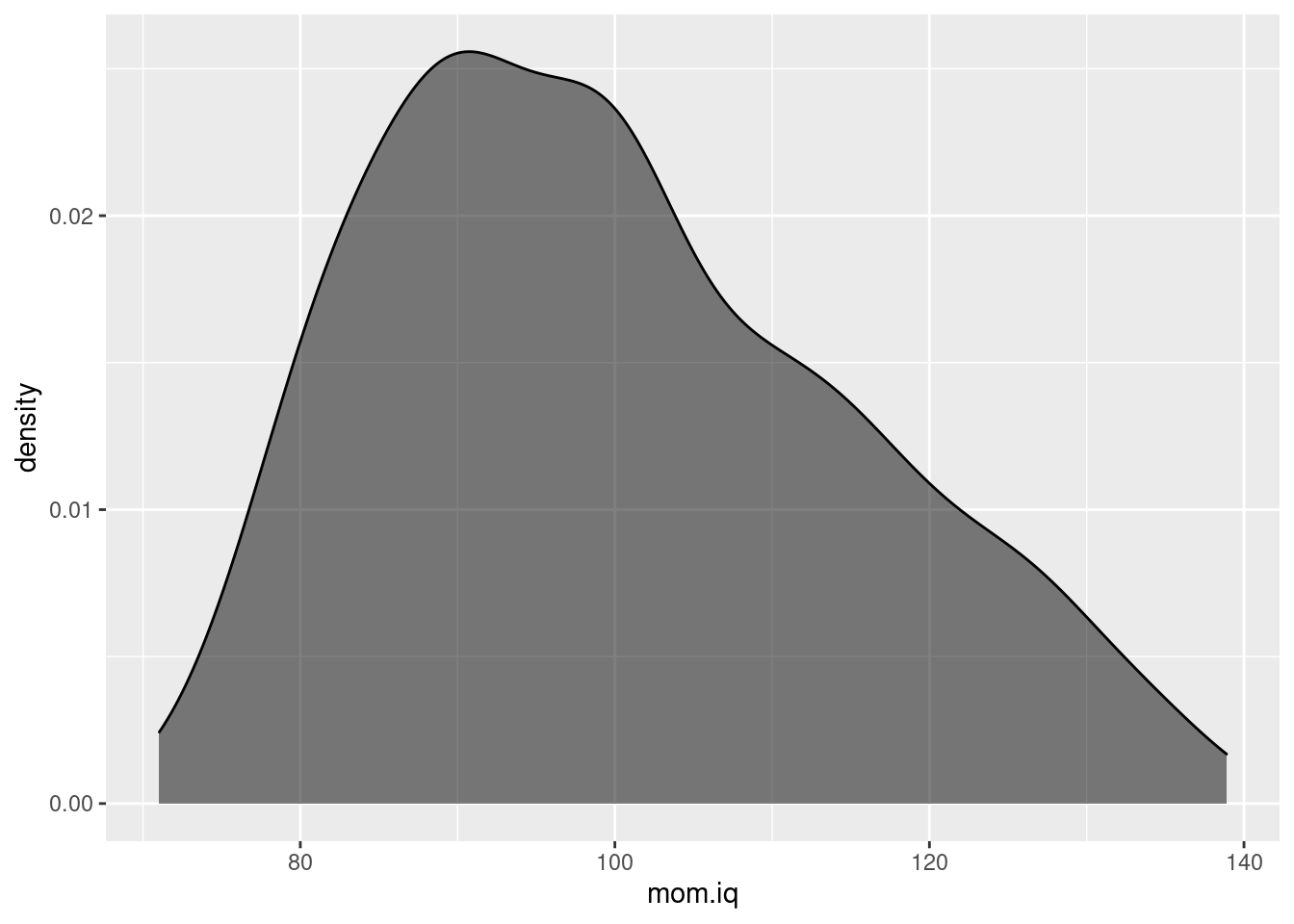 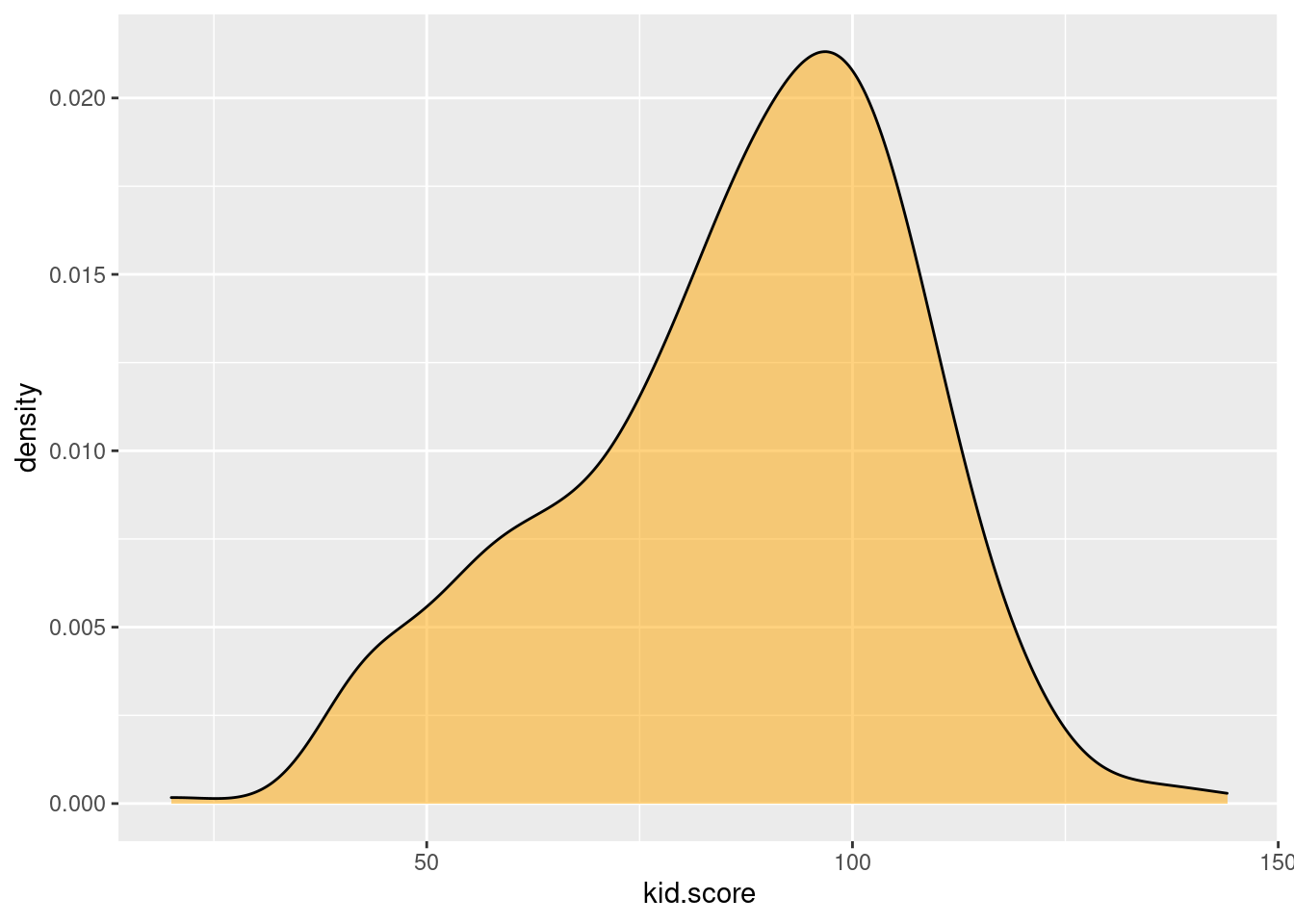 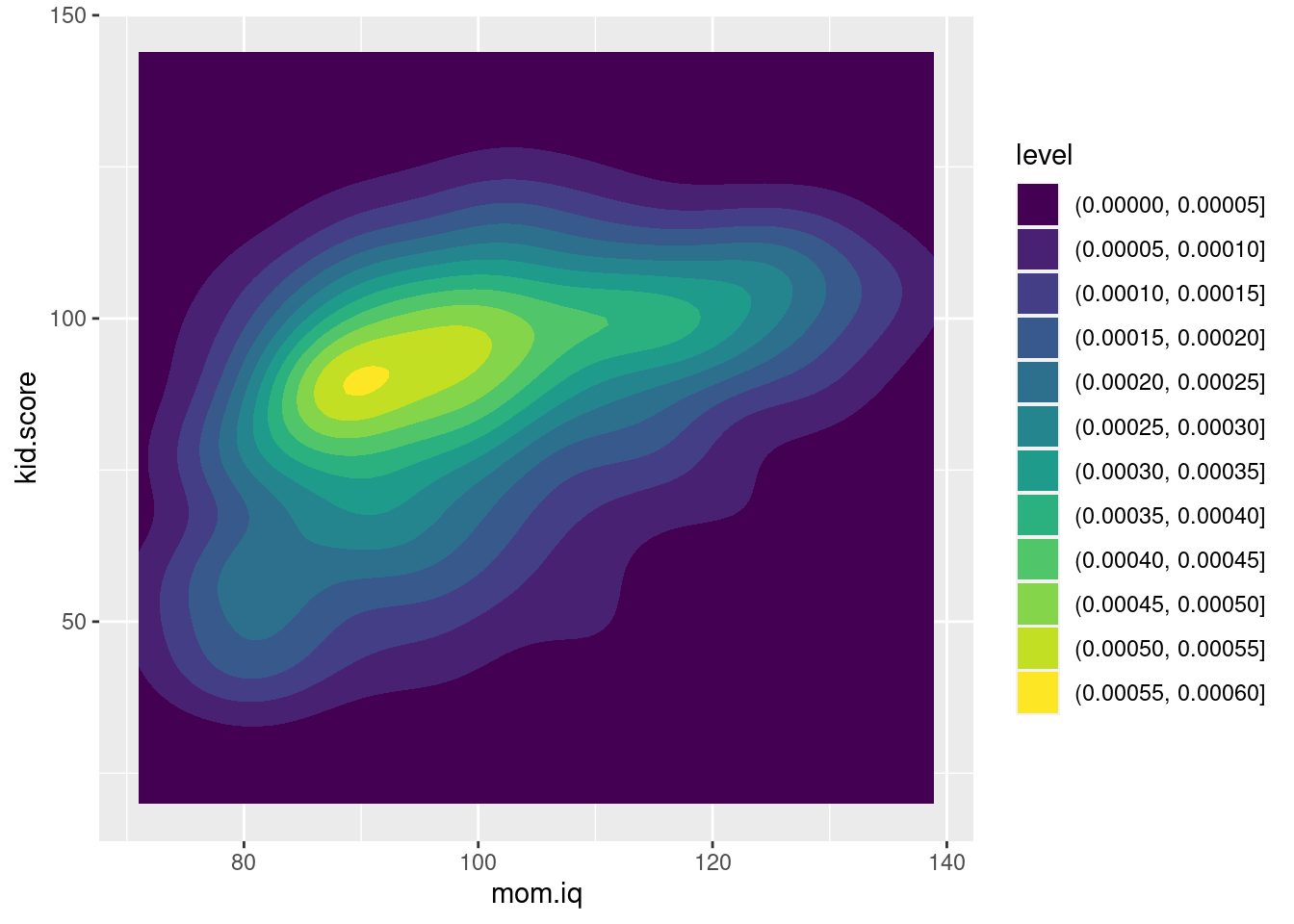 7.3.5 Multiply by Scalars to Change the Variance

The first argument of matrix() is the vector of values that we will use to fill our matrix; ncol and nrow are the desired numbers of columns and rows. By default, R fills matrices by column. To make things easier to read, I've added line breaks so you can "see" the matrix and set the argument byrow = TRUE so that R will fill A by row instead.

Finally, we need to know how to multiply matrices in R. There are two notions of a "matrix product" in R. The first is elementwise multiplication: A * B multiplies every element of A by the corresponding element of B for example

The second, and the one we need here, is matrix multiplication: A %*% B creates a matrix whose [i,j] element is the dot product of A[i,] with B[,j]. This is the "usual" matrix product that you know and love from linear algebra, for example:

Putting the pieces together gives a slicker way to construct the matrix x from above, namely t(A %*% t(z)):

Because each of them is a sum of independent normals, both \(X_1\) and \(X_2\) are themselves normal random variables. They are both marginally normal and jointly normal: 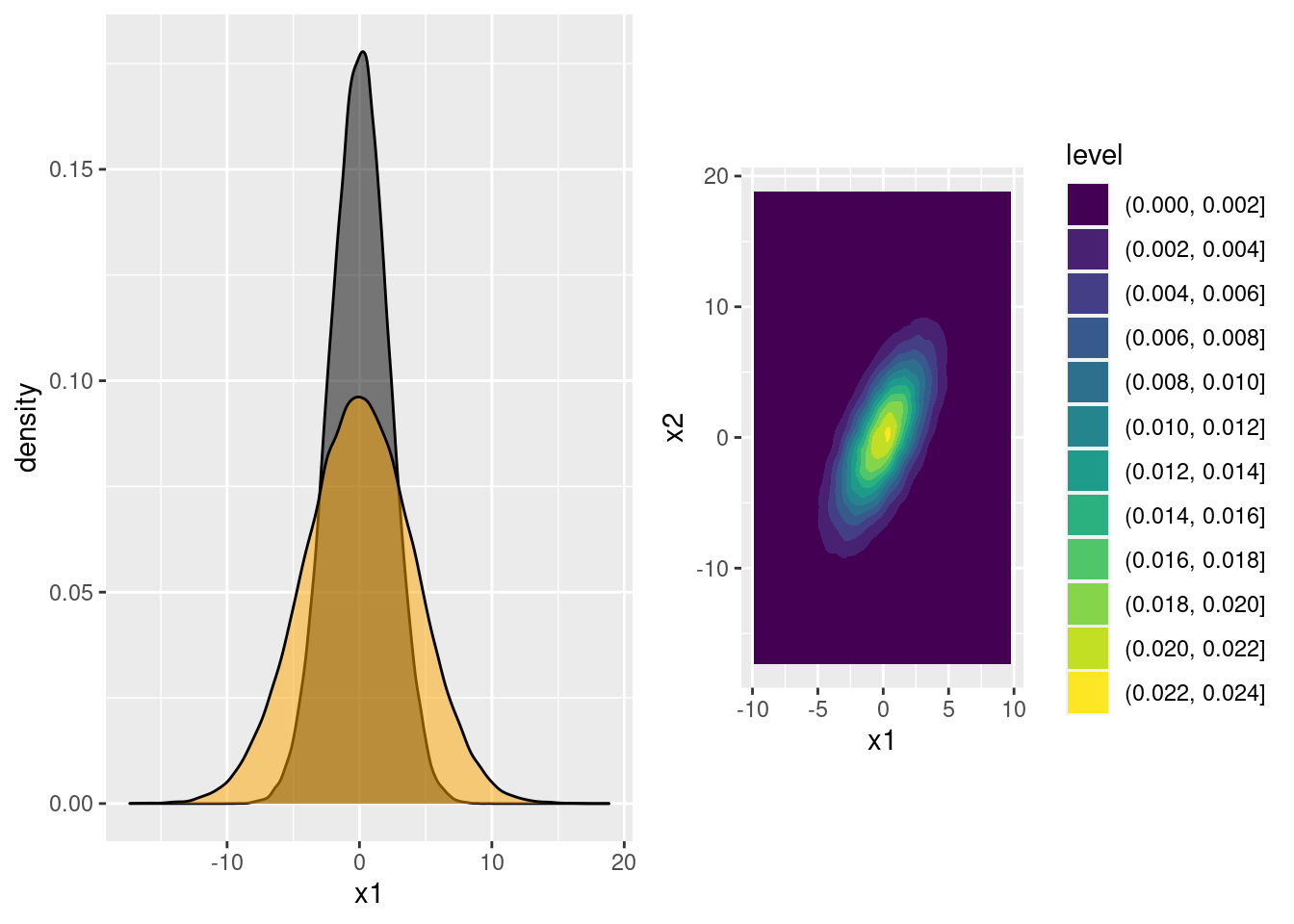 Notice that the correlation between \(X_1\) and \(X_2\) produces a tilted ellipse in the joint density plot. The ellipse slopes upward because \(X_1\) and \(X_2\) are positively correlated. So how can we tell what covariances we'll end up with for a particular choice of A? You'll work out the answer in the following exercise.

The sample variance-covariance matrix from our simulations is quite close: 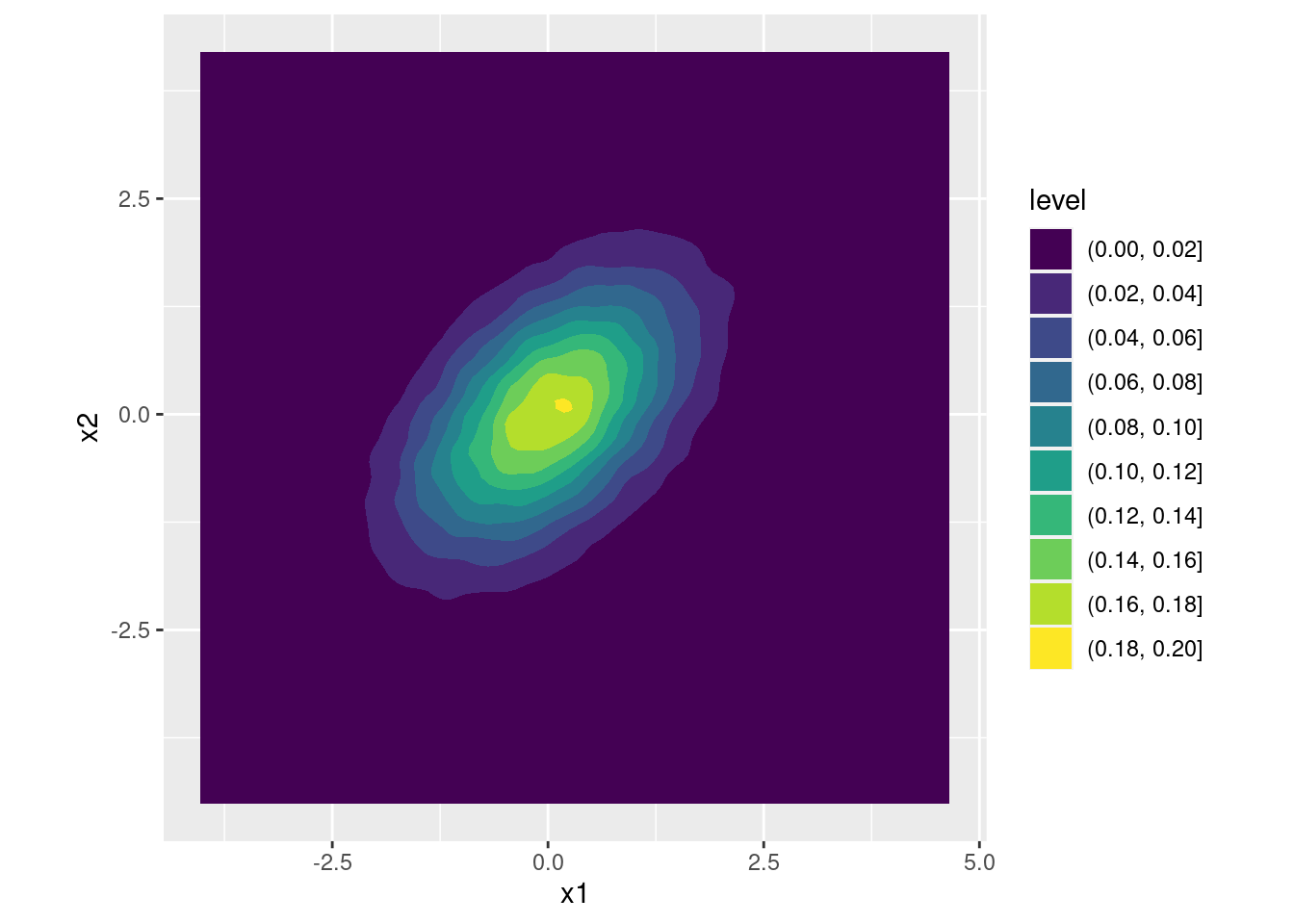 There are many matrices \(\mathbf{A}\) that will do the trick. Following from our reasoning above, construct the one that obeys this convention: the diagonal elements of \(\mathbf{A}\) should be positive, and the element above the diagonal should be zero. In other words: \(b=0\) and \(a, d > 0\). 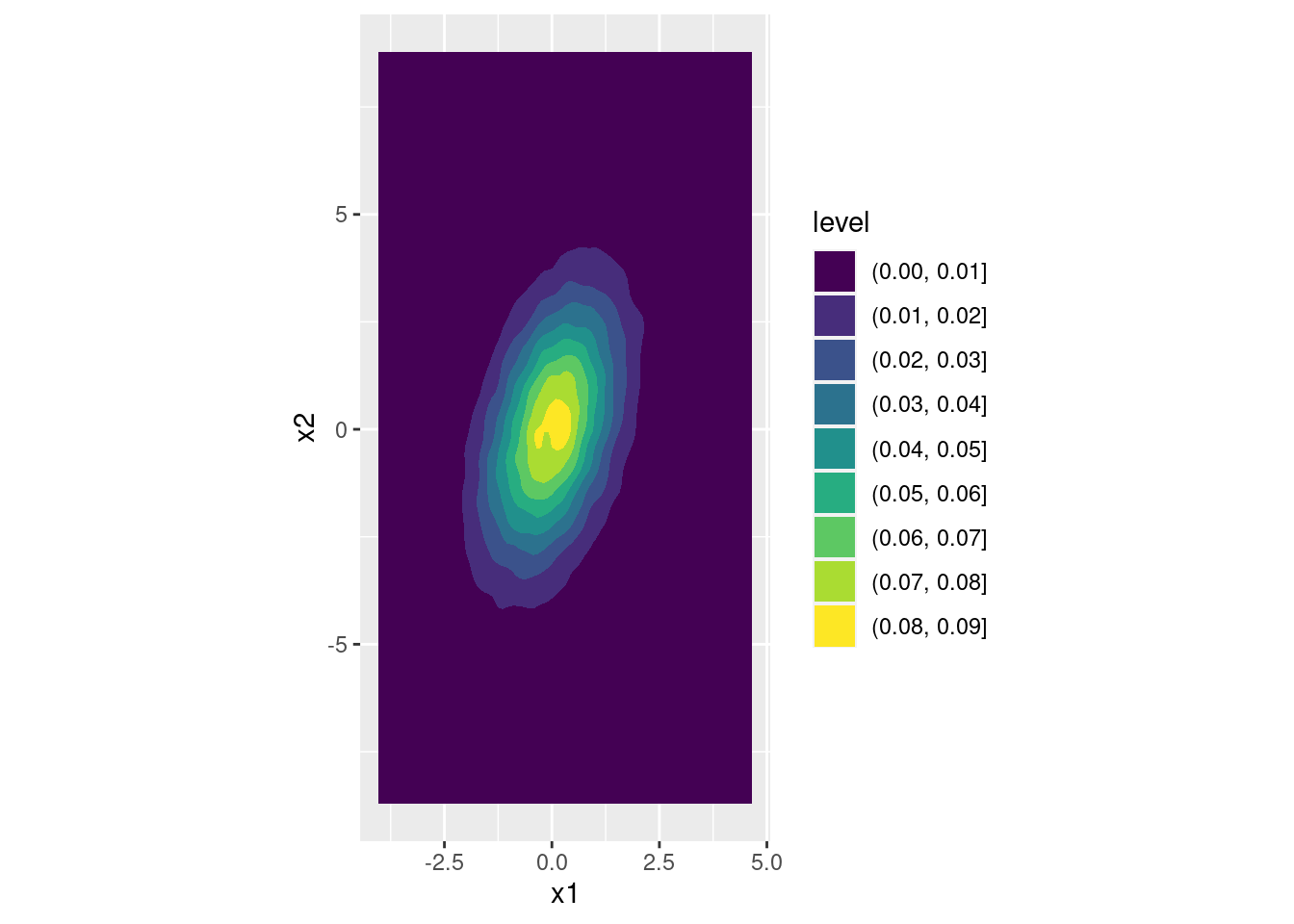 There are two important facts about square roots. First, they don't always exist: there's no real number that equals \(\sqrt{-4}\). Second, they're not necessarily unique: both \(-2\) and \(2\) equal four when squared. So is it always possible to write a variance-covariance matrix in the form \(\mathbf{A}\mathbf{A}'\)? The answer turns out to be yes.

Here's how to remember this quirk: true to its name R returns an upper triangular matrix \(\mathbf{R}\), so its version of Cholesky is \(\boldsymbol{\Sigma} = \mathbf{R} \mathbf{R}'\). Armed with this knowledge, we can now generate more than two correlated normal random variables, as you'll discover in the following exercise.

So why did I pack all of this matrix algebra into a book that is ostensibly about empirical research methods? There are several reasons. First, you will one day encounter an error in your code telling you that a certain matrix is not positive definite! You need to understand what this means and why it's important. Second, the Cholesky decomposition comes up all over the place in applied econometrics and statistics. Now that you understand how to build it up from scratch in the \((2\times 2)\) case, I hope you will find the general idea intuitive rather than mystifying when you next encounter it. Third, and most importantly, the approach of building up everything from scratch by combining Cholesky with independent standard normals pays big dividends in helping you understand the multivariate normal distribution. To show you what I mean, here are two important facts that you can now deduce effectively for free from what you've worked out above.

7.5.1 Affine Transformations of a Multivariate Normal

Suppose that \(X_1\) and \(X_2\) are jointly normal with mean vector \(\boldsymbol{\mu}\) and variance-covariance matrix \(\boldsymbol{Sigma}\). What is the conditional distribution of \(X_2\) given \(X_1\)? There's a formula you could memorize, but if you're anything like me you'll forget this when you need it the most. Instead, let's use Cholesky to help us.